As promised in my last “first look” review, I’m taking Qlikview 10 for a spin. For those of you not familiar with Qlickview it’s a data visualization tool that’s designed to make the creation of ad-hoc reports and dashboards, from existing data, quick and simple. Installation Getting hold of Qlikview is a matter of registering on their web site and downloading the “personal” edition. The personal edition has the limitation of not being able to share your Qlickview files with any other users, but doesn’t appear to have any other time or functionality restrictions. You will probably want to download the tutorial. This is made up of some sample files and a PDF tutorial. Whilst a PDF feels a bit “old school” however it is clearly written and progressive, making it pretty easy to follow. Interface 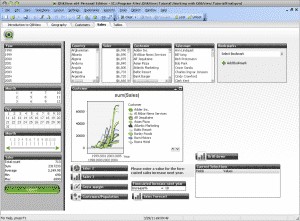 The interface is very “Office 2003”. Not a bad thing, in that most of the icons are pretty easy to figure out, but it does feel quite dated (Qlikview 11 is being trumpeted on their blog – so this may be remedied soon). The workspace is also pretty bare until you start adding some data. There’s not too much clutter though and most Windows follow sensible conventions (right click on an object for properties etc.)

Applying the “man test” Being a vain middle aged man I prefer not to read tutorials and instructions. The “man test” is very subjective, and in this case I did resort to reading the tutorial (whereas with Tableau I was compelled by child-like curiosity to cobble something together without instructions). This isn’t to say that Qlickview isn’t intuitive – it’s really very good, but it’s not quite as visual and inviting as apps such as Tableau. Features that really stood out Qlikview seems to bring the data to the fore. Your start point is very much the fields that make up the database and you then add charts onto this. One of Qlickviews specialities – they call it the Associative Engine – seems to be the ability to filter all linked fields in other tables when selecting any field in any table. It greys-out not applicable data and highlights linked data in white – so you understand the associative relationship (or not) between datasets.   I think I’d need to use this tool in anger on my own data set to really understand the benefits of this approach, but it seems logical and intuitive – all good. Dashboards are quick and easy to create, at least as simple as Tableau – they are both drag-and-drop efforts. Qlikview makes it fractionally easier to tweak the look and feel of objects. Tables are easy to create and to drop into dashboards. Interactivity on tables and charts is excellent, allowing you to reselect data and ranges on the fly. Things I didn’t like This type of tool is all about delivering insight from your data. This inevitably includes charts. Working through the tutorial I was very disappointed by the standard of charts shown. Now it may well be possible to tweak these graphs to follow better practice, but frankly we shouldn’t have to. Having charts like this:

…is unacceptable. It shows a real lack of understanding of how to present information and you wonder how much of this attitude spills into the design of other templates and software features. The 3d pie chart…

.. had me biting lumps out of the carpet – but perhaps it’s just me (see this rant about pie charts for the background of my loathing). By the time I got to mock-gauges…   …I was inconsolable. Tableau can do “proper” charts, with minimal clutter, careful use of colour and good layout – Qlickview, you can do better. One of Qlickviews selling points is that it’s “in-memory”, so it should be able to execute analysis very swiftly. However, the Gartner report from 2011 on BI tools indicates that customers are not particularly stunned by the overall speed of Qlikview and I have concerns over server memory usage – a query I still have open with Qlickview sales (i.e. what happens when you exceed the available memory with your requirements). Sharing There are lots of ways to share your output:

Pretty much every method you could hope for, save carrier pigeon. Verdict I like the ease of use of Qlikview. I was very under-whelmed by it’s charting ability- it feels like the defaults and the tutorial regard graphic representation as an afterthought – this was backed up by their sales person commenting on the “pretty graphs” of their rival – Qlikview – you just don’t seem to get it!  The company are making great play of the way it handles data, and specifically the relationship between that data, so I think it merits some further investigation. Watch this space for some longer-term road testing and a more in-depth review.

Posted in Review
Scroll To Top